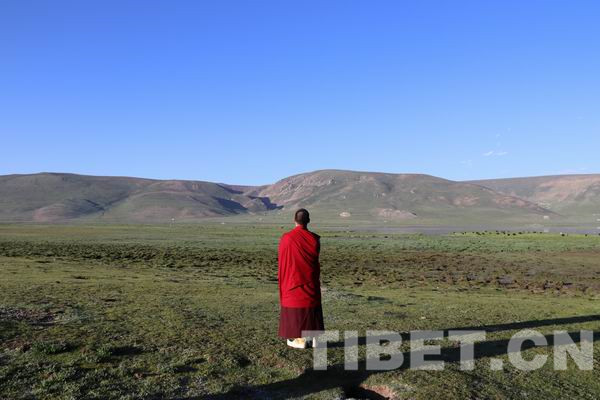 On the morning of July 19, by the Rongbo beach 80 kilometers northwest of Yushu, Qinghai Province, the 11th Panchen Lama Bainqen Erdini Qoigyijabu dressed up in burgundy monk robe stepped onto the green meadow in high spirits, followed by several monks. 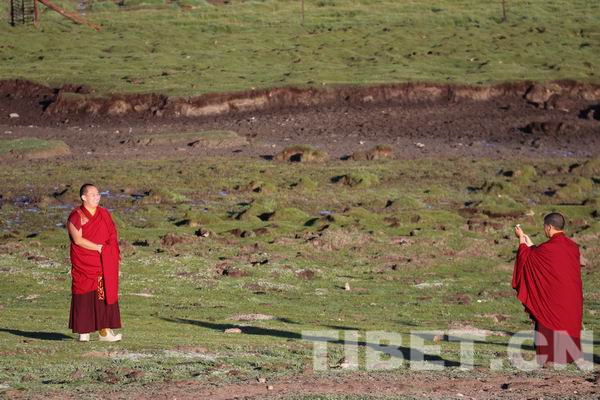 The Panchen Lama also posed for pictures on the grassland, showing his love of this beautiful piece of land. 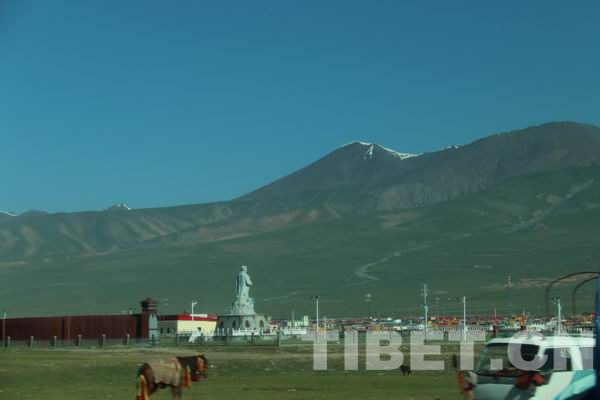 The Panchen Lama was here on his way to hold Buddhist activities at Gongsar Monastery in Zhidoi County, Qinghai, where he would bless for followers at the Tashitan Grassland in front of the monastery, visit a nursing home in the county  for charitable activities and bless for the elderly there. 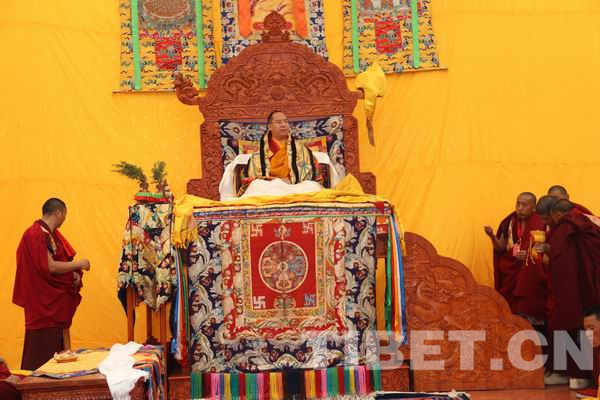 Zhidoi County, which sits 4,500 meters above sea level, is one of the purely nomadic counties in Yushu Prefecture. It is located 195 kilometers northwest of the prefectural seat Yushu City, and to the west of it is the famous Hohxil area. 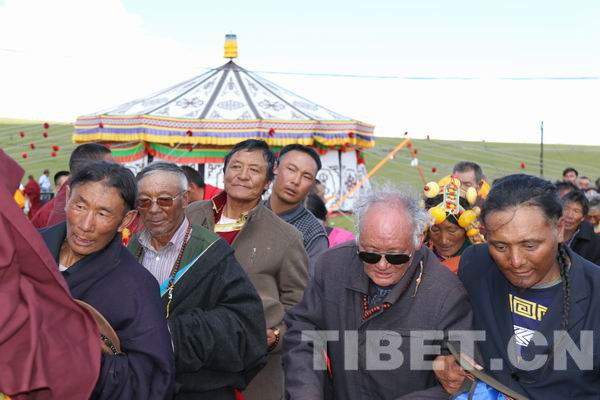 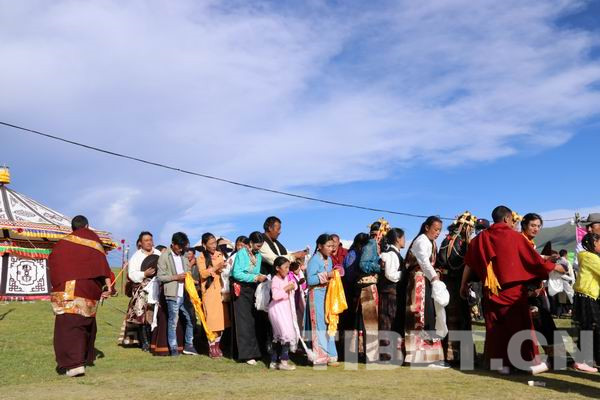 Locals wear festive clothing to greet the Panchen Lama along his route. 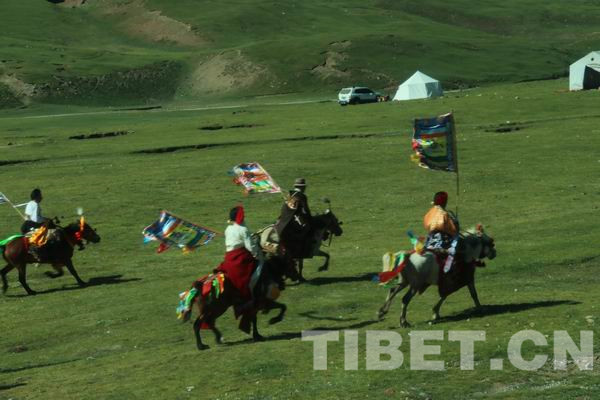 As the Panchen Lama’s car neared Gongsar Monastery, local nomads riding their own horses held out prayer flags and khatas to welcome his arrival. Two lead riders also carried the Chinese national flag. The Panchen Lama stood inside an open car and waved to the riders. In addition to the riders, locals also organized a yak team and several youths ride the yaks on both sides of the car. Khampa horseback riders welcome the Panchen Lama. 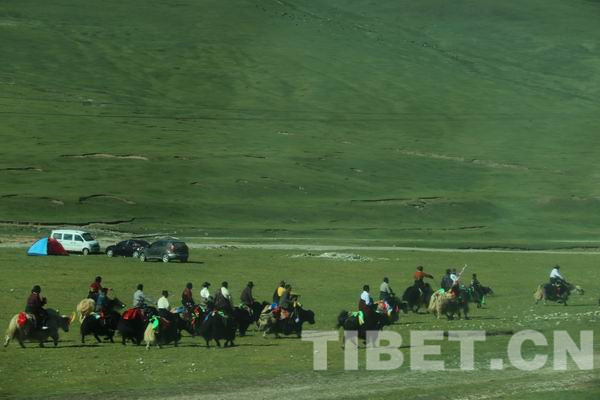 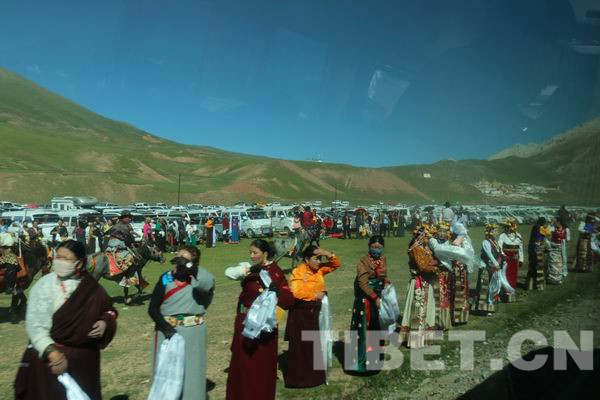 Monks at Gongsar Monastery perform a traditional ceremony to welcome the arrival of the Panchen Lama. 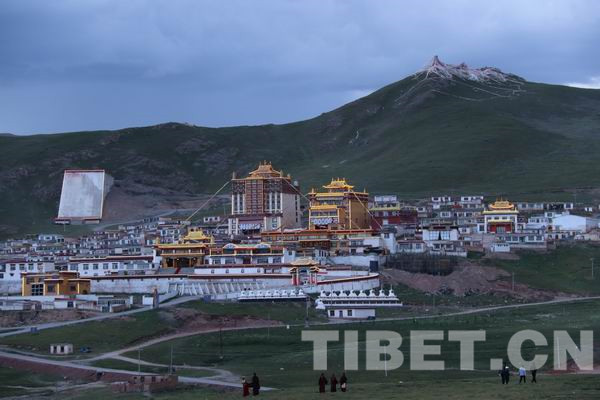 Gongsar Monastery is the only monastery in Zhidoi County. It was built in the 12th century by Choegyal Tsechung Bongba of the Kagyu sect of Tibetan Buddhism. In the 15th century it became a Gelug sect monastery. 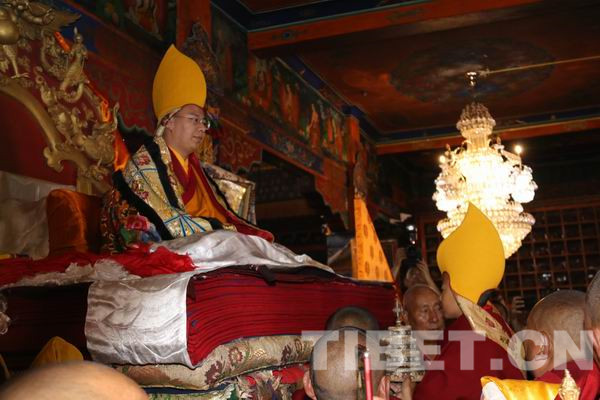 The Panchen Lama receives a respectful welcome from the 10th Choegyal Rinpoche of Gongsar Monastery.

The Panchen Lama held Buddhist activities in the main scripture hall of Gongsar Monastery and blessed for monks there by touching the tops of their heads. The monks offered their well prepared offerings and gifts to the Panchen Lama, who also presented them with alms, protective amulets, and souvenirs. 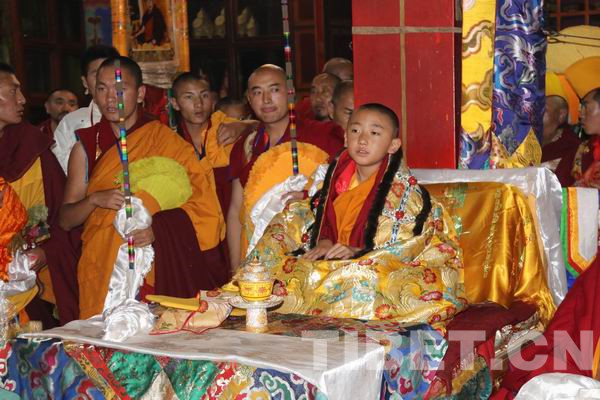 The 10th Choegyal Rinpoche of Gongsar Monastery listens to the Panchen Lama carefully as he recites dharma. 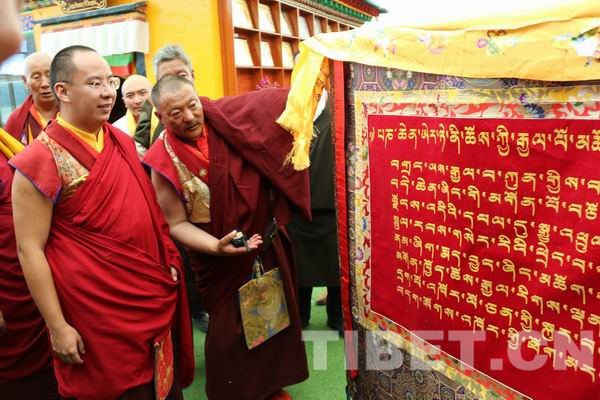 Afterwards, the Panchen Lama came to Gongsar Monastery’s Tsongkhapa Hall to hold a prayer ceremony to consecrate the Tsongkhapa statue. The statue is 14.98 meters round, 35.32 meters high, with a lotus seat 4.1 meters high. It is the world’s largest indoor gilded bronze statue. It has earned a Guinness Book of World Records certificate, and it is made from copper, gold, dzi beads, amber, and coral. 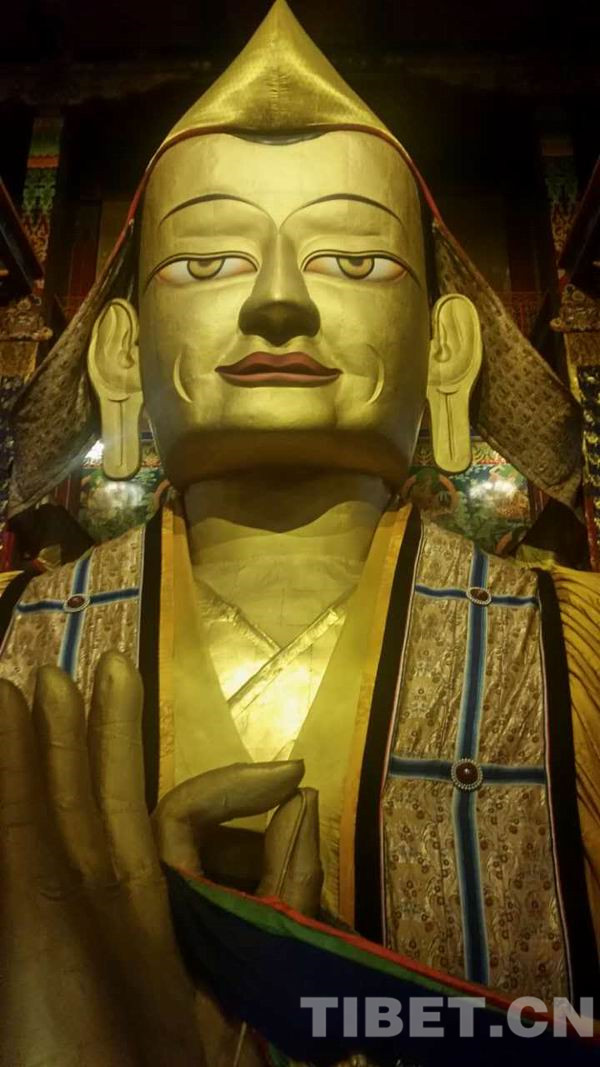 After a brief lunch break at midday, the Panchen Lama went to the Tashitan Grassland in front of the monastery, where he held a longevity abhiseca  ceremony. 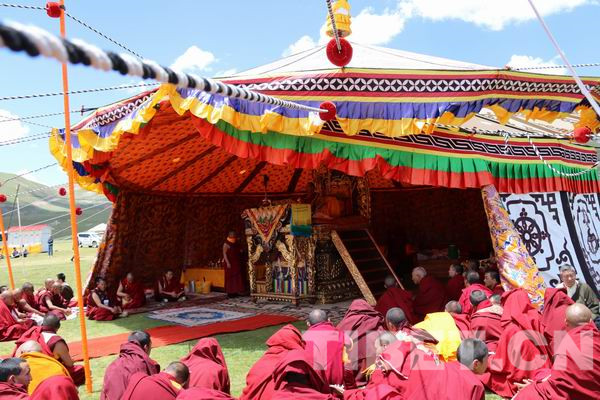 The Panchen Lama recites dharma inside his tent. 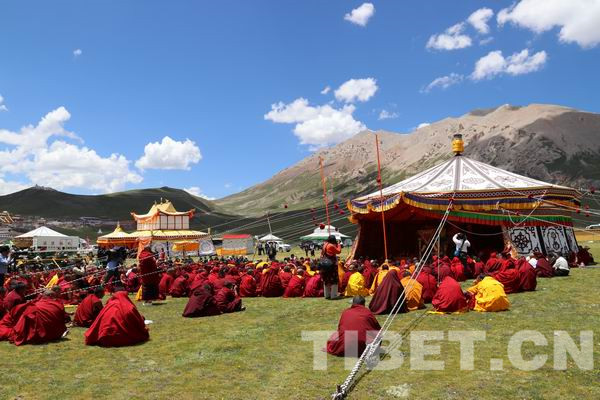 Monks of Gongsar Monastery listen attentively to the dharma ceremony.

It is originally planned that the Panchen Lama would end his blessing for people of Zhidoi County at 6:00 p.m. However, in order to ensure that all the devotees could receive blessings, the Panchen Lama did not finish until after 9:00 p.m. after touching the heads of nearly 20,000 people. 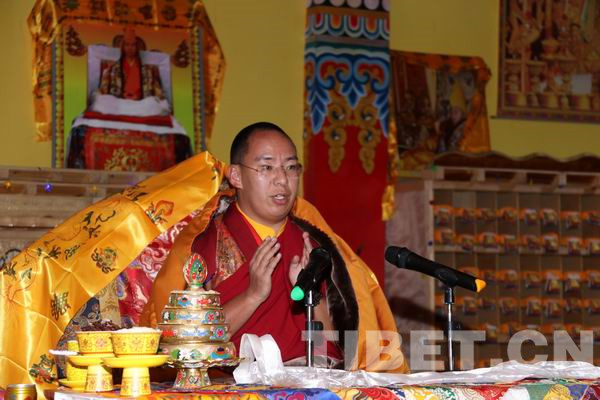 The Panchen Lama recites sutras and prays at the XingfuNursing Home. 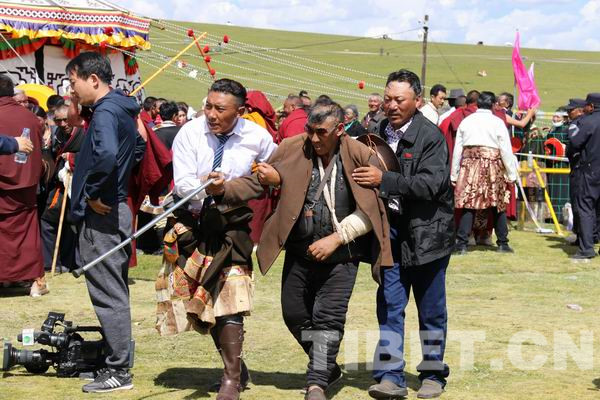 Followers wait to be blessed by the Panchen Lama. People with disabilities and the elderly received priority treatment.

There were also moving stories happened. Several elderly people were assisted by those around them and placed at the front of the line to be blessed first. Some people who fainted as a result of waiting in the sun too long were immediately helped by local medical volunteers. 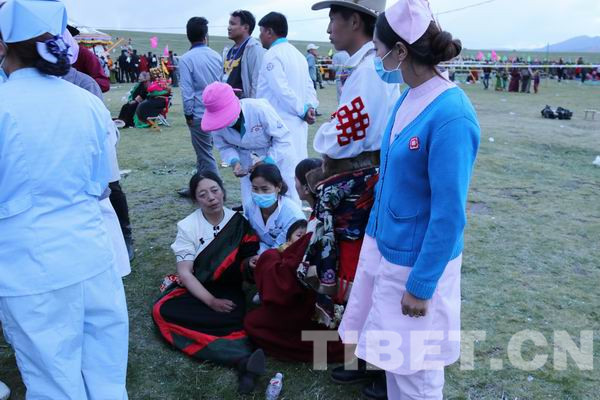 Medical workers at the dharma assembly.

One pregnant woman even gave birth while she was waiting in line to receive blessings. Thanks to the comprehensive medical assistance arranged by local government, the mother was safe and sound, and her child was even named by the Panchen Lama, “Panchen Gyi”.

At night, the Panchen Lama did not stop his visit to the elderly who had been waiting at the Xingfu Nursing Home in Zhidoi County. He recited prayers and blessed them. Some seriously ill and paralyzed elderly received blessings from the Panchen Lama in their beds, whose eyes were filled with tears. They said repeatedly, “Thank you, Panchen Rinpoche!” 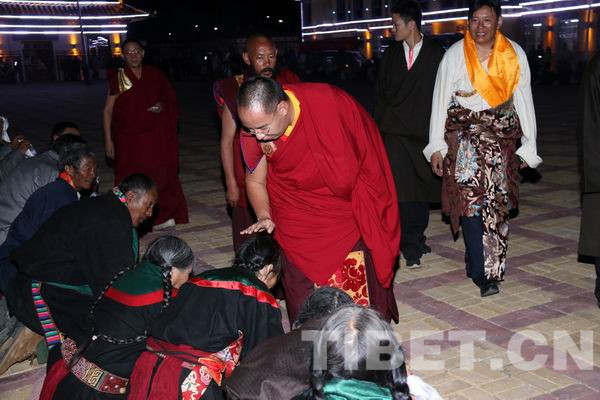 The Panchen Lama touches the heads of the elderly to bless them at the Xingfu Nursing Home. 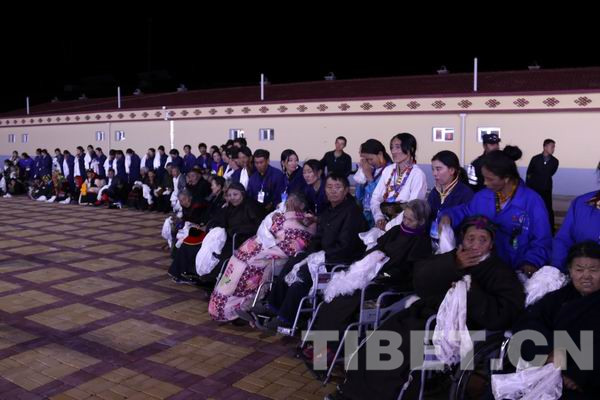 Elderly folks wait to receive blessings from the Panchen Lama. 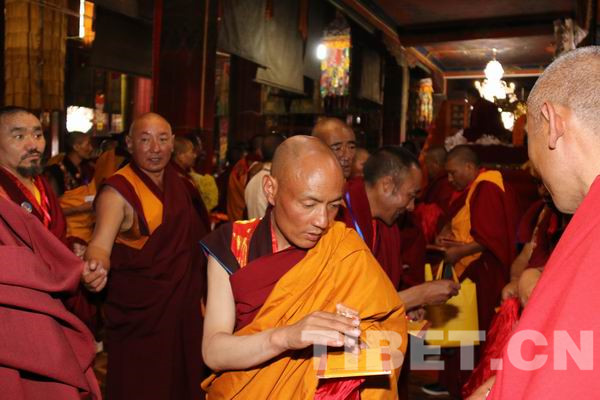 Monks who have received gifts from the Panchen Lama. 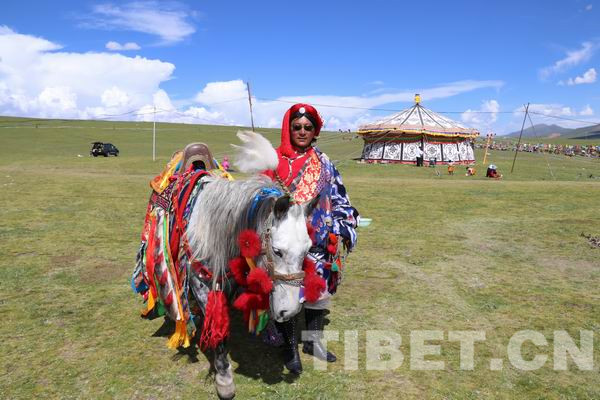 Local Buddhists from Zhidoi County prepare to give a horse to the Panchen Lama. This horse won first place once at a races. 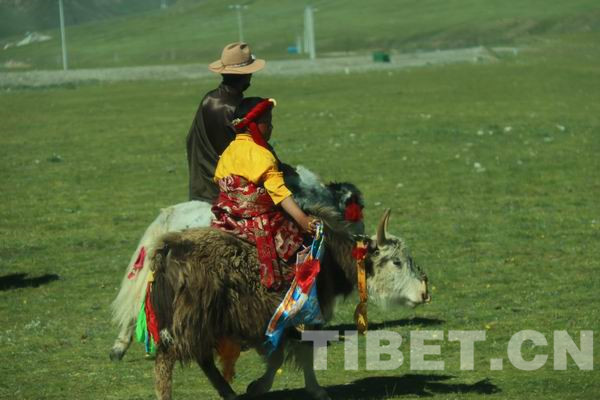